Matt Gryiewski and I met at the back of the pack - literally. It was one of Midtown's long Saturday hilly rides that Matt and I met and had to work together to finish the ride. Since then we have been on many other adventures, some ill advised, most of them with searing heat, rain, or cold. But that doesn't stop us. Matt has a great heart for others and loves the sport of cycling as you can see below. 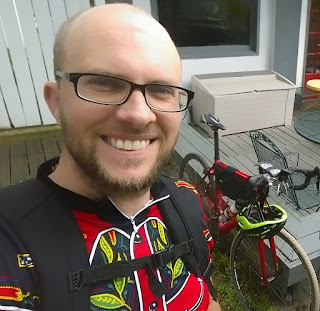 Who got you into cycling as a sport? I had a friend in elementary school that invited me to go for a bike ride and I asked "to where" and he said "no, not bike to get somewhere but bike to have fun." After that he taught me a lot about the sport and the budding world of mountain biking. From then on I really got into it since he and I could make little challenges for ourselves like trying to ride to the mall, ride to the state fairgrounds, ride to a sporting event. For two middle schoolers, this was equivalent to riding across the country. We always felt accomplished. I supposed in many ways I've never stopped this pattern since.

What was your first or favorite bike? My first modern road bike was a Giant OCR and I loved it, it was perfect for me but was stolen when I was at work one day. I did events all over Southern California, Arizona and even one in Mexico with it. I think about this bike as being the bike that really brought me to a whole other level of involvement in the sport.
What do you like so much about bike commuting? I've always loved biking commuting because it adds a little of adventure and vigor to every day. Also, in many ways, it makes commuting more predictable in the sense that I pretty much know how long it takes me to ride to the places I go a lot and traffic and weather almost never impacts this and if it does it is usually something I can plan ahead for. Bike commuting also is an important way I save money, despite how much I spend on bike stuff it is still much less than using a car. It is also nice that I don't have to find additional time to workout outside the normal routine of going to work.


How far is your commute? When do you not bike commute?


Currently, my route is about 8 miles each way. The only weather condition I really shrink from is rain, especially when its cold. Being wet us much harder to handle than being cold by itself. Also, in the winter I use my fat bike to commute and sometimes you have to plan that out a bit more since it takes so much space. Sometimes I'll find another way to commute if I don't think I'll have room for it at the places I need to go.
What tips would you give someone about bike commuting?
I've been bike commuting since I was in high school and have learned a lot. Especially pertaining to commuting to work, I find it helpful to keep your work clothes at the office somewhere, along with some recovery food. This saves a lot of weight and helps keep the commuting routine simple. Also, if you can have a small electric fan at your desk this will do a great job drying you off when you get to work, much better in my experience than a towel. Most of my coworkers have no idea that I bike to work since I tend to be able to clean up so quick after I get there. On cold days I recommend putting on all of your riding gear as early as you can so you start to get hot in your house before you leave, or at the office before you head home.This will help you feel motivated to get out the door and ride if you are feeling lazy.
What is your greatest achievement on the bike? Definitely, my greatest achievement on the bike was when I got 5th in the public category of the Everest Challenge stage race in Bishop,CA in 2006. It was a two-day 208-mile race with 29,000 feet of climbing. It was unforgettable scenery of riding the divide between the eastern Sierra mountains and Death Valley. They guys who used to put on the event did an amazing job providing nutrition and volunteer support too.


What is your favorite gravel bike race or event to do? Why?


My favorite gravel rides tend to be those in northern Minnesota. I really like the Grand Du Nord. Its just so different and Grand Marais is just such an amazing little town. I like the idea of basically riding to Canada and back. I think riding through forests is much more fun than riding through farmlands.


What is your next gravel race?


I usually like to start my season with the Mammoth Gravel Classic. It's in such a beautiful area and St.Croix Falls,WI is such a great town. I feel I didn't really get a fair crack at the 100-mile route last year since it rained so much so I'm hoping for a more suitable scenario this year.


What is your A race/event this upcoming year?


Last year I joined the Minnesota Randonneurs and did a number of 200km rides. The next level is 300km and I'd like to attempt one of those in 2018 and if that goes well maybe even a 400km.


What other races/events are on your list for this year?


Other events this year include a (hopefully) triumphant return to the Almonzo 100 after last years icebath that ended after 40 miles. I'll likely do the Hill Billy Gravel ride (Huston,MN) as training for Almazo, though it is much harder than Almanzo. I hope to also do the Grand Du Nord again and I also have a massive ax to gride with the Heck of the North and hope to return with a vengeance. 2017, in general, was a hard year for me due to some business travel that interrupted my exercise routine quite a bit. I hope to get back to doing what works for me for 2018.


What is one of your bucket list gravel races?


Someday I'd love to do a 1000km Randonneur event. I'd also love to do the Haute Route: Rockies, Bad Lands Gravel Battle, Lutsen 99er (though it is technically a mountain bike race), Dirty Kanza (of course), Gravel Conspiracy, and I'm sure I'm forgetting some.


What advice would you have for someone starting to get into gravel racing?


I would recommend checking out the websites for the events as often they will have the maps or cue cards on their year round. That way you can see where things go and if you wanted to could even go ride the route any time you wanted and shorten it if you needed to as well.  Also put some effort into choosing the right bike. I would generally recommend a bike with no less than 30mm wide tires. I would also recommend finding a way to bring three or more water bottle with. In general don't go to a gravel event expecting that the route has been planned to avoid major terrain obstacles and wind, quite the opposite! Gravel rides are hard and they are meant to be hard.


What music playlist are you listening to now?


Lately, I've been listening to the groups Beyond the Waves and Infinity Shred. While I ride I also typically listen to Audible books, usually about psychology or therapy.
Posted by Unknown at 8:51 AM